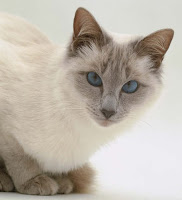 The Balinese is the result of a concerted effort in the 1930s and 1940s to produce a longhaired, pointed cat. This breeding strategy was eventually successful. The Balinese, considered to be a cousin of the Siamese, is known for its grace and poise, and are often called the ‘Bali dancer of the cat world’ which is the source of the exotic name. Their strong personalities make them wonderful pets and loving companions.

The Development of the Balinese

Even before there was an effort to develop a longhaired version of the Siamese, there were occasionally kittens born to Siamese parents that had semi-long hair. Most breeders of Siamese kittens ignored or discarded these kittens, but some thought they were desirable enough to make a breed out of them. And so began the effort to create the Balinese.

Whether the longhaired Siamese is a result of hybridization of mutation is not entirely clear. Regardless, Siamese breeders took exception to the label ‘longhaired Siamese’, and so a woman by the name of Helen Smith proposed the name Balinese, since the graceful cats reminded her of Bali dancers she had once seen. The name was quickly accepted by the Cat Fanciers’ Federation in 1963.

Though continued outcrosses with the Siamese have led to a shortening of the Balinese coat, they are still and will continue to be a distinct and recognized breed.

Some Breed Standards for the Balinese

The standards for the Balinese, as with many other breeds, are quite strict. It is quite easy to have a cat that is penalized or even disqualified, so those picking a show or breeding kitten should do so with care.

General: The Balinese is a svelte cat with a long, lithe, strong, and muscular body. The Balinese must be neither flabby nor bony, and must have clear eyes.

Head: The head should be a long and tapering wedge, medium-sized and in proportion to the body. The wedge of the head begins at the nose and flares out to the ears, creating a triangle, with no break at the whiskers.

Ears: Strikingly large and pointed, the ears of the Balinese are wide at the base and slightly pricked forward, as if listening.

Eyes: Should be almond shaped and medium in size. Uncrossed eyes are desirable, and they should be slanted towards the nose. Eyes must be blue in color.

Body: The Balinese should have a long and dainty body, with a combination of fine bones and firm muscles. Hips must not be wider than the shoulders, and the abdomen should be tight. The neck should be long and slender, the legs long and slim, and the toes dainty, small, and oval.

Tail: The tail of the Balinese should be long, thin, and tapering to a fine point. Tail hair should spread out like a plume.

Coat: The coat of the Balinese is long, fine, and silky, but with no apparent undercoat. Acceptable colors include chocolate point, seal point, and lilac point; some associations accept other colors and patterns. There must be no ticking or white hairs in the points.

Penalties: Crossed eyes warrant a penalty for all Balinese cats. Also, any cat with a lack of pigment in the nose leather or paw pads in part or in total will be assessed a penalty.

Disqualifications: Any sign of illness or poor health is grounds for disqualification. Also, nasal obstruction or occlusion, kink in the tail, or eye color other than blue will result in a cat being disqualified.

The Balinese is a slender and beautiful breed. Their unique temperament and stunning physical appearance combines to make them a delightful companion for all cat lovers.
Posted by The Random Writer at 1:04 PM