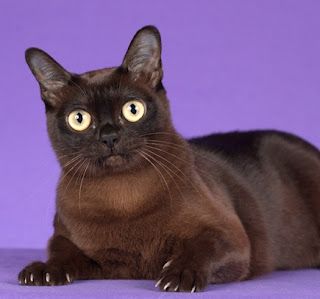 The first Burmese to arrive in the United States, a small brown cat named Wong Mau, accompanied a sailor on a journey from Rangoon to San Francisco in 1930. Wong Mau had a dark brown body with even darker points on her face, ears, legs, and tail. When she was purchased by a Navy psychiatrist, Dr. Joseph Thompson, who bred her to a seal point Siamese. The results of this mating were Siamese kittens, and some kittens with a darker body very much like her own. When these darker kittens were bred together, they produced dark kittens, but these kittens were even-colored, lacking Wong Mau’s markings. This was taken as evidence that Wong Mau was a hybrid cat with Siamese in her background.

The Development of the Burmese

The first Burmese was registered in the United States in 1936. Very few Burmese were registered at this time, because the Cat Fanciers’ Association (CFA) required three generations of like-to-like breeding before they would accept a cat as a purebred. This presented a problem because the Burmese gene pool was too small. Many breeders were still using seal point Siamese in their breeding programs to continue to produce quality kittens. In the 1930s, the only difference between a Siamese and a Burmese was the color.

By 1940, the Burmese had been accepted by three different associations for competition. However, in 1947, the CFA suspended the recognition of the breed, since there were so few who could meet the three-generation requirement. The only thing that saved the breed from extinction during this time was the fact that both the American Cat Association and the Cat Fanciers’ Federation continued to recognize the Burmese.

In the late 1950s, the Burmese, having established itself, was reinstated into the CFA. However, new Standards were also introduced, Standards which were almost opposite the Standards of the Siamese from which the Burmese was descended. In theory, this should have eliminated outcrossing, but the breed still needed new blood. So, crosses with the black Domestic Shorthair became common.

Eventually, the new look of the Burmese became popular, as did the introduction of new colors. However, the new colors were a point of bitter dispute between breeders, some of whom thought that only brown cats should be considered Burmese. Today, champagne, platinum, and blue Burmese are quite common, as is the original sable.

Some Breed Standards for the Burmese

The Standards for the Burmese, as with many other breeds, are quite strict. It is quite easy to have a cat that is penalized or even disqualified, so those picking a show or breeding kitten should do so with care.

General: The ideal Burmese is a cat of medium size with good muscle tone, and is surprisingly heavy for its size. This cat also has uniquely communicative eyes and a sweet expression.

Head: Pleasingly round without flat planes, the head should be well proportioned in relation to the body. The face is full, the muzzle short, and there should be a visible nose break.

Ears: The ears of the Burmese should be medium in size, set well apart, and rounded at the tips. They should also be broad at the base, and have an alert appearance.

Eyes: The eyes should be large, set far apart, and have a rounded aperture.

Body: A Burmese should present a compact appearance. This medium-sized cat should have legs that are in proportion to the body. Paws should be rounded, with five toes in front and four behind. Males should be larger than females.

Tail: The ideal Burmese has a straight tail, medium in length, with a gentle taper.

Coat: The coat of a Burmese should be fine and glossy. It should have a satin like texture, and be very short and close lying.

Penalties: Any cat with distinct barring on either the front of the rear outer legs will be assessed a penalty. Kittens and younger adults may have faint barring, which should disappear as the cat ages.

Disqualifications: There are several reasons a Burmese might be disqualified. These include: blue eyes, tail defects, distinct barring on the torso, lockets or spots, or anything that disrupts the line of the head or body.

The Burmese is a heavy and muscular cat, and they generally experience good health. However, these cats are prone to certain health defects, such as cleft palates and skulls that do not close. They are sweet, loving, and unique, and make wonderful companions for many cat lovers.
Posted by The Random Writer at 10:01 AM No comments: