Getting a Picky Cat to Eat 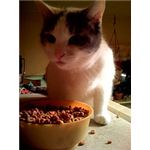 Many cats will eat anything. Cat food. Cheese. Bread. Broccoli. An old sock. Whatever it is, they'll eat it. It can be amusing to see what foods these cats will eventually turn down.

However, some cats are so picky that they rarely eat anything. Oh, they'll prance around as if they're starving, but once you fill their bowl, they just walk away or stare at you like you're trying to poison them. Your cat may have a variety of reasons for not eating, but whatever the reason, it can drive you just a little bit batty as you search for something your cat finds acceptable. If you're faced with a finicky cat, try these tips for dealing with him or her.
A cat who is finicky can be stressful for both you and the cat. Get creative and be patient with your feline friend. She may be trying to tell you something.
Posted by The Random Writer at 12:34 PM No comments:

I've often been asked if I think cats get bored. I can understand the question. They seem so aloof and independent that it seems only natural that they would be able to entertain themselves. And to a large extent, they can. But cats still can get bored.

What is the source of boredom in cats? The answer is a little complicated. Cats sleep much of the day. As they sleep, they build up energy. At some point, this energy needs to be worked off. In addition, cats are natural predators. They are designed to hunt, and hunting helps to burn off all that pent-up energy. If your cat's not hunting, she might get bored.

There's still another trait that most cats share that can contribute to boredom. Cats, for the most part, love attention even when they don't show it. So if your cat spends a great deal of time home alone, expect that your cat will be facing long stretches of boredom.

You can help to ward off boredom in your cat. Start by setting adie 10 minutes each day to play with your cat. Your cat will appreciate it and you'll have fun too. Also consider providing your cat with a selection of safe cat toys. Have 4 or 5 toys laying around the house for her to play with. Every 2 weeks or so, rotate toys, bringing out 4 or 5 new toys and hiding the old ones. This will help keep your cat interested, and those old toys will be treated like new again the next time you bring them out.

Bored cats can get into trouble looking for something entertaining to do. So take a few minutes every days to make sure you're providing your cat with enough entertainment and stimulation to ward off boredom.
Posted by The Random Writer at 10:00 AM No comments:

The 20th century has seen many different hybrid cat breeds. A hybrid is defined as a cat whose parents are of two different, but established breeds. The resulting offspring, while not a true breed unto themselves, are unique enough to be given their own name. One of these hybrids, the Marlot, is the result of crossing an ocelot female with a Margay male.

In August of 1976, the Long Island Ocelot Club Newsletter announced the birth of a male kitten into the family of Barbara Brocks. This kitten, with an ocelot mother and a Margay father, was called a Marlot. The parents, both of whom were approximately three and a half years old, were bred in captivity.

A few months later, in February of 1977, a second kitten was announced, a little girl named Precious. She was a vocal little girl with a slick spotted coat. She resembled both parents with rosettes that were dark like a Margay. Her golden coat also seemed to come from her Margay father, but she certainly had the ocelot tail and pink nose. Brocks mentioned another Marlot kitten, Baby, in 1980. It is assumed that there were other kittens, though this hasn’t been confirmed.

The Marlot is a breed typically only known to cat breeders. It is quite rare, and also quite expensive. Very few people have seen one in person, and there aren’t many pictures around, so most people don’t even know what they look like. Marlots are typically sandy in color with a brown marbled pattern. In fact, they look a little like Bengals, but more wild and with more variation in markings, due to their hybrid nature.

With a stripped pattern on the legs and tail, the Marlot could be said to have a tabby appearance. The spots on the main body as well as the general facial structure resemble the Margay parent, though the body seems more like an ocelot. The coat has a wonderful shine, and the entire cat is built for jumping.

As a pet, these cats are very much like their wild ancestors. They are playful and mischievous, and inclined to get into trouble. If left to their own devices, they will climb and jump to the highest places, and tend to knock things over. This isn’t because they’re clumsy. They simply enjoy the pleasure of it.

Marlots are highly clever. They are the type of cat that can figure out how to open a locked cupboard just to get to the food you left in there. Because Marlots are the descendants of wild cats, they require a great deal of socialization as kittens. If you choose to purchase one of these unique cats, you should be prepared to spend a great deal of time with your new family member.

Because of their rarity, information regarding Marlots is limited. Though it is certain that breeders have continued to cross the Margay with the ocelot, it is impossible to estimate just how many of these cats have been bred since the 1970s. It is not even certain that this was the first time these breeds were crossed. Despite their rarity, their unique look and attitude make this hybrid breed an attractive prospect for the cat lover looking for a loving companion.
Posted by The Random Writer at 9:16 AM No comments: