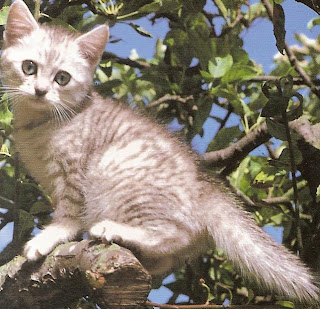 Finding the right kitten for you and your family is not simply a matter of walking into the nearest pet shop and picking the cutest one. At least, it shouldn’t be. No two kittens are alike, so you have to take into consideration the needs of the individual kitten, and whether or not those needs are compatible with you and your existing life.

You have to first decide if you’d like to adopt a kitten or purchase a purebred. Read about the characteristics of each breed so you know what to expect, but don’t discount the mixed breeds to be found at your local animal shelter. If you do choose a purebred, research the breeder carefully.

Though cats have a reputation for aloofness, they are in truth loving and affectionate, not to mention amusing. They are also clean and very self-sufficient. Most cats are more than happy to lounge in the sun all day waiting for you to return home from work. They are also supremely adaptable, and can, in general, fit into the busy schedules of the modern-day family. However, just because they can be left at home for hours at a time doesn’t mean they should be. Ideally, you should be able to spend at least a few hours a day with your new friend.

Kittens, just like people, come in many different personalities. There are kittens who are painfully shy, kittens who are clowns, and kittens who want nothing more than to sit on your lap all evening. When choosing a kitten, you should observe it closely. Watch how it plays with its littermates. A kitten who is right in the middle of the fun, bounding and tumbling with the others, is likely in good health and developing as any kitten should. The kitten who hangs back and watches might be feeling ill, or it might have the kind of personality that requires a little more patience and nurturing from its new family.

It’s a good idea to wiggle a couple fingers in front of a kitten, or dangle a toy or piece of string just about its head. Does the kitten scamper over to investigate, or does it back away? A confident, happy kitten will be eager to examine anything new. A kitten who is nervous or timid will not.

If you have other pets or children at home, the curious kitten is a better choice. This kitten will adjust more quickly and be more likely to get along with the other family members. The timid kitten will likely hide under the nearest sofa, stressing everyone involved.

Regardless of temperament, the only suitable kitten is a healthy kitten. Observe the health and general demeanor of the kitten. Are its eyes bright, shiny, and clear? Does the kitten follow the toy that was waved in front of him? Is the nose cool and slightly damp? Is the tail area clean? Are the gums a nice, healthy pink and free of inflammation?

Avoid any kitten with a dry, warm nose, as this is probably a sign of poor health. Likewise for teary eyes. Inflamed gums may indicate gingivitis, and pale gums are never a good thing. Dirt or wetness around the tail may signify diarrhea, and this could easily herald ill health.

Check the ears carefully. They should be clean and free of any dirt or wax. The body of any healthy kitten should be soft and smooth. Maybe the kitten will be slightly lean, but it should not be skinny. If you see any bald patches, scabs, or scratches, the kitten may have ringworm. Flea dirt always means fleas.

Even if the kitten appears healthy, you should get a health guarantee. Take the kitten to the vet within five business days. The veterinarian will examine the kitten in detail, checking its temperature, weighing the kitten, and hopefully testing for worms, leukemia, and any other diseases. If the vet discovers anything serious, you should take the kitten back.

In general, kittens should not be separated from their mothers until they are at least ten weeks of age, and preferably closer to twelve weeks. This ensures they’ve been properly weaned and have begun to make the transition from dependent kitten to independent cat. Kittens which are younger than this are still just babies, and babies, no matter how cute, still need their mother. If it is at all possible, wait until the kitten is ten to twelve weeks old before bringing it home.

A cat can easily live for fourteen years, perhaps even longer. They are a commitment, requiring years of love, attention, food and veterinary care. If you can commit to this, you might be ready to choose your kitten.
Posted by The Random Writer at 12:04 PM No comments:

The Ancestry of the Modern Domestic Cat

The origins of the modern domestic feline has been hotly debated throughout the last century or so. While there is no firm answer to the question of the ancestry of the cat, there are many conclusions that may be reached with a little research and some creative thinking.

Who is the Ancestor of the Domestic Cat?

It is most likely that the African wild cat, which has the scientific name of Felis silvestris libyca, is the ancestor of the modern domestic cat. The African wild cat is yellow in color with faint stripes, and is only slightly larger than the modern-day cat. This species is found mostly in the deserts of Africa, Syria, Arabia, and some parts of India.

In addition to that, the modern cat does have a hearing apparatus that indicates that it may have been developed in open spaces, such as the desert and other arid climates. Behaviorally, the African wild cat is very docile and easily tamed, much more so than other cats of its size. All of these, and several others, are compelling reasons to conclude that the African wild cat is indeed the ancestor of the modern domestic feline.

Other Possible Ancestors of the Domestic Cat

It is also possible that Pallas's Cat, whose scientific name is Felis manul, played a part in the development of the modern feline. This cat is believed by some to be the longhaired cat's distant ancestor, due to its own long hair. This breed is native to the steppes of northern and central Asia.

Perhaps the European wild cat, Felis silvestris silvestris, who was never actually domesticated, bred with domesticated cats in the fourth century. This would explain the darker tabby markings than those produced by descendants of the African wild cat. It is important to note that the ancestors of the modern-day cat were ticked, mackered, or spotted tabbies. The classic tabby markings, also called blotched, that are seen today are not found in any other member of the cat family. It appears that classic tabby marking are a gene mutation in the domestic cat, and not passed down from any previous ancestor.

Whatever the origins of the cat, it is clear that there is likely more than one ancestor. Our modern domestic cat is probably a mix of several feline species from across the globe. While most research suggests that the African wild cat is the most likely ancestor, it is impossible to rule out the influence of other breeds on the modern-day cat.
Posted by The Random Writer at 1:26 PM No comments:

The Domestication of the Cat

Most likely, the cat was originally domesticated in Egypt, but the date of this can only be approximated. Though the earliest known pictographs representing cats appear around the third millennium BCE (Before Common Era), it is very difficult to say whether these were wild cats, or domesticated. However, it is almost certain that by approximately 1600 BCE, cats were slightly domesticated, as they become increasingly common in paintings and other Egyptian art.

The Beginnings of the Domesticated Cat

For all other domesticated animals, their integration into human life was purposely directed by humans. However, this does not appear to be the case with cats. Rather, it seems that the cat almost domesticated itself, with only slight help from the humans.

Regardless of how they were domesticated, it was certainly to the purpose of hunting vermin, and to some small degree for companionship. Essentially, as the human population grew and expanded, cats were naturally attracted to both the extra discarded food, and the increasing population of rats and mice. Slowly, as the cats proved that they were useful, humans began feeding them, hoping they'd stay. They did.
Why Domestication Took Longer With Cats Than Other Animals

Cats are not considered fully domesticated. In fact, cats are said to be the most domestic of the wild animals, and the most wild of the domestic. There are a couple of factors that have led to this development. First of all, with the exception of the lion and the cheetah, cats are solitary creatures. This is unlike any other domesticated animal. The survival of the cat does not depend upon a group; they answer only to themselves, as a general rule. Horses and dogs, though, follow a leader, an alpha. This natural group instinct makes it very easy for humans to become the alpha, the pack or herd leader, so to speak. A cat, not possessing this instinct, does not follow so easily.

Secondly, cats, until the late 19th century, were not selectively bred. Humans exerted virtually no control over their choice of mates. All other domesticated animals had been subjected to selective breeding for thousands of years before this. Since the more docile animals were chosen to breed, a more domestic temperament was naturally the result.

The Final Stage in the Domestication of the Cat

It could be argued that domestication, then, did not begin until humans began selectively breeding cats. It was not until the first pedigreed (meaning selectively bred) cats, came about that the feline became truly domesticated. The older the pedigree, the more domesticated the cat, in a manner of speaking.

Compared to dogs, goats, sheep, and horses, cats have been domesticated for only a short while. However, it can already be seen how selective breeding has changed and altered the cat and its personality. Based on this, most breeders would say that every effort should be made to breed as much for temperament as for do color and type.

Though the truth about the origins of the domestic cat will likely always be shrouded in mystery, it can be stated with a fair degree of certainty that the domestication of the modern feline began in or around ancient Egypt. This domestication spread, until the appearance of what is now seen as the modern cat.
Posted by The Random Writer at 1:44 PM No comments: